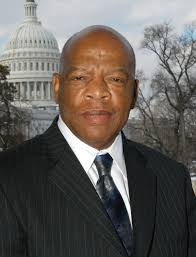 Our nation continues to mourn the passing of Congressman John Lewis,  whose funeral was today at Ebenezer Baptist Church in Atlanta.  Presidents Bush and Clinton spoke, and President Obama delivered the eulogy. (You can find the transcript of Obama’s eulogy here).

Here are a few inspirational quotes from Congressman Lewis, taken from speeches which in which he talks about his lifelong fight for civil rights.  Share them with your children, and enjoy.