#SelmaforStudents is The Story of a Movement Too

Home/Featured, Latest News, Motivators, Saving Our Sons/#SelmaforStudents is The Story of a Movement Too
Previous Next

#SelmaforStudents is The Story of a Movement Too

“Selma is the story of a movement” reads the promotional materials for this critically acclaimed movie which opened in theaters across the country this weekend. #SelmaforStudents, the nationwide effort of Black business leaders to make sure our young people see this movie, is the story of a movement too. GCP was there at the beginning, and we can tell you how it is unfolding.

On December 31, 2014, a group of friends which included a number of business leaders, gathered for dinner to ring in the New Year together. Over drinks the conversation turned to “Selma”, which a few of them had already seen (it opened in December in a few cities, including NYC). Investment banker Bill Lewis asked the question “Wouldn’t it be great if all 8th graders could see this film?” and a number of people agreed, including Charles Phillips, CEO of Infor, his wife Karen, and Bill’s wife Carol Sutton Lewis (yours truly). As they all began to discuss how this could happen, Phillips, who sits on the board of Viacom (which owns Paramount), offered to contact the Viacom/Paramount powers that be and investigate what could be done. Several other people were a part of the conversation, including Kenneth Chenault, CEO of American Express, his wife Kathryn, and Dr. N. Anthony Coles, the former CEO of Onyx Pharmecuticals and his wife Robyn, and the group immediately agreed to help both financially and in figuring out how to get this done quickly.

The next chapter of this story demonstrates the power of passion, productivity and the mobile device. In the space of a few days beginning January 1, the group, led by Charles Phillips, Bill Lewis, and Ken Chenault raised $280,000 from their business friends. No corporations, just a group of their African American friends whom they knew would quickly get the concept and agree to support it. Charles worked with Paramount to figure out how this plan could be most easily implemented, which included his negotiating a discounted rate for the student tickets, and enabling students to gain free entry by showing a school id or a report card. Many members of the team contacted everyone they knew who had a connection to middle school/high school students, including the New York Public Library, the Harlem Children’s Zone, KIPP, Abysinnian Baptist Church, The Harlem School of the Arts, Eagle Academy, Carver Bank, and the Apollo Theater. As momentum grew, the Department of Education and the Mayor’s Office were convinced by team member Fred Terrell to announce and support this effort. All of this happened very quickly, with people sending emails from their offices, living rooms, and in one instance, oceanside on a Caribbean beach. Paramount sent out the first press release announcing the NYC plan on January 7, a mere four business days after the idea was hatched at dinner.

Once the NYC press release was out, Team #SelmaforStudents went to work on making sure that other communities had the chance to follow the NYC model. This meant a lot more work on the iPhones, iPads and Blackberries, as they contacted friends across the country who had the ability to get this done in their cities. These efforts were wildly successful: this morning Paramount distributed another press release announcing that Boston, Nashville, New Jersey, Philadelphia, San Francisco, Sarasota, FL, and Westchester have all created funds to send students to see the film. Other cities are expected to be announced on Wednesday.

Simultaneously Team #SelmaforStudents launched a social media campaign to make sure everyone knew what was going on and could help. Thus far Selma director Ava DuVernay, Oprah, John Legend and Common (who just won a Golden Globe for their song “Glory” from the movie), and former NY Giant (now Oakland Raider) Justin Tuck are just a few of the many who have tweeted about this campaign. DuVernay tweeted: “27 Black Business leaders have done the unprecedented. Created a fund for 27,000 NYC Students to see SELMA for free!” Led by the Boston team, #SelmaforStudents has asked students nationwide who have taken advantage of this opportunity to share their reflections of “Selma” on social media, using the hashtag “#SelmaforStudents“. The latest version of Paramount’s website on this effort, found here at www.SelmaMovie.com/studenttickets, includes this effort.

Meanwhile, the response in NYC has been overwhelming. When the film opened widely on Friday January 9th the 28,000 tickets sold out quickly, and with Paramount’s help the offer was extended throughout the weekend, so that over 62,000 students were able to secure tickets to see the film. Today I visited a morning showing of the film with middle and high school boys from Eagle Academy, an all boys charter school network in NYC. Here are some of the boys entering the theater: 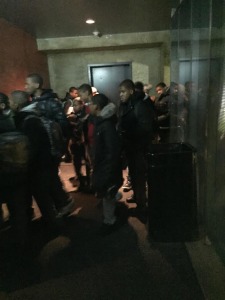 It was thrilling to see the theater packed with African American young men who were about to see this wonderful movie about this important piece of American history. It was also thrilling to know that they were there due to the efforts of a group of African American men and women who were determined to use their resources quickly and effectively to make a difference. The #SelmaforStudents movement continues.