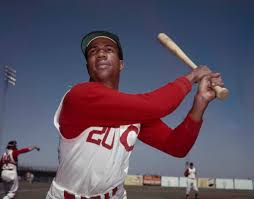 Baseball legend Frank Robinson passed away this week at 83.  Robinson broke records throughout his long illustrious career.  As a player, he was National League Rookie of the Year for the Cincinnati Reds.  He was the only winner of the Most Valuable Player Award in both the National League (when playing with the Cincinnati Reds in 1956) and the American League (while playing with the Orioles in 1966). In his six seasons with the Orioles, he helped lead the team to four pennants and two World Series championships.

Robinson was known as an intense player and manager, one who held everyone (including himself) to the highest standards.  He was highly respected by teammates and players across the league.   Hall of Fame pitcher Jim Palmer spoke for many as he summed up his feelings for Robinson: “[H]e was the leader.  He was the guy.  He made us all better.”  President George W. Bush presented Robinson with the Presidential Medal of Freedom, the nation’s highest civilian award, at a White House ceremony in 2005, citing him for “extraordinary achievements as a baseball player and manager and for setting a lasting example of character in athletics.”

Tell your sons (and daughters) about this trailblazing icon!