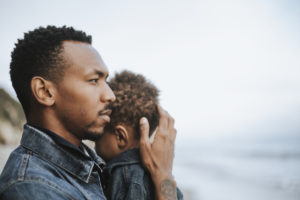 Hope all you GCP dads had a terrific Father’s Day!  In your honor, today’s Thoughtful Thursday presents three poems which pay tribute to fathers.  First, a sentimental,  heart-warming salute to hard working Dads everywhere in “Only a Dad” by Edgar Guest (1881-1959).  Then, a GCP favorite, “Those Winter Sundays” by Robert Hayden (1913-1980), which also recognizes a father’s daily rituals as labors of love.  And finally,  we have a father’s wise advice to his son in  “What I Mean When I Say Harmony (I)” by Geffrey Davis (b. 1983).

Share these poems with your children and continue to celebrate the fathers and father figures in your lives.  Enjoy.

Only a dad, with a tired face,
Coming home from the daily race,
Bringing little of gold or fame,
To show how well he has played the game,
But glad in his heart that his own rejoice
To see him come, and to hear his voice.

Only a dad, with a brood of four,
One of ten million men or more.
Plodding along in the daily strife,
Bearing the whips and the scorns of life,
With never a whimper of pain or hate,
For the sake of those who at home await.

Only a dad, neither rich nor proud,
Merely one of the surging crowd
Toiling, striving from day to day,
Facing whatever may come his way,
Silent, whenever the harsh condemn,
And bearing it all for the love of them.

Only a dad, but he gives his all
To smooth the way for his children small,
Doing, with courage stern and grim,
The deeds that his father did for him.
This is the line that for him I pen,
Only a dad, but the best of men.

What I Mean When I Say Harmony (I)

Dear Boy: Be the muscle,
make music to the bone—risk

who touch a body and leave it
graceful:      be that kind

of wonder in the dark.      And if I ever
catch you confusing

a pulse for a path      or a bridge
to beat loneliness, your blood

will be the object of discussion—:
I will ask to see it back,

if only to know the shared sinew,
if only to relight your blessing,

if only to rekindle the song
carried in your hands.