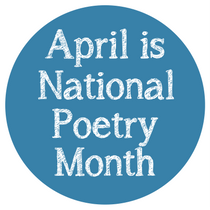 April is National Poetry Month!  National Poetry Month was established in 1996 by the Academy of American Poets to increase  America’s awareness and appreciation of poetry. Our first Thoughtful Thursday of National Poetry Month begins with a beautiful poem about poetry from Archibald MacLeish (1892-1982), whose career over the course of his long life included being a lawyer, Fortune magazine editor, and Librarian of Congress as well as a poet. We follow this with the fantastic “Letter to Brooks: Spring Garden” by Major Jackson, author of four books of poetry, who is a professor of poetry at the University of Vermont and editor of the Harvard Poetry Review. Read both poems (especially the last one) aloud to your children, and enjoy.

A poem should be palpable and mute
As a globed fruit,

Dumb
As old medallions to the thumb,

A poem should be wordless
As the flight of birds.

A poem should be motionless in time
As the moon climbs,

Leaving, as the moon releases
Twig by twig the night-entangled trees,

Leaving, as the moon behind the winter leaves,
Memory by memory the mind—

A poem should be motionless in time
As the moon climbs.

A poem should be equal to:
Not true.

For all the history of grief
An empty doorway and a maple leaf.

For love
The leaning grasses and two lights above the sea—

A poem should not mean
But be.

When you have forgotten (to bring into
Play that fragrant morsel of rhetoric,
Crisp as autumnal air), when you
Have forgotten, say, sunlit corners, brick
Full of skyline, rowhomes, smokestacks,
Billboards, littered rooftops & wondered
What bread wrappers reflect of our hunger,

Man,” or his scoop and chain scale,
His belief in shad and amberjack; when
You have forgotten Ajax and tin pails,
Blue crystals frothing on marble front
Steps Saturday mornings, or the garden
Of old men playing checkers, the curbs
White-washed like two lines out to the burbs,

Or the hopscotch squares painted new
In the street, the pitter-patter of feet
Landing on rhymes. “How do you
Like the weather, girls? All in together, girls,
January, February, March, April… ”
The jump ropes’ portentous looming,
Their great, aching love blooming.

When you have forgotten packs of grape-
Flavored Now & Laters, the squares
Of sugar flattening on the tongue, the elation
You felt reaching into the corner-store jar,
Grasping a handful of Blow Pops, candy bars
With names you didn’t recognize but came
To learn. All the turf battles. All the war games.

When you have forgotten popsicle stick
Races along the curb and hydrant fights,
Then, retrieve this letter from your stack
I’ve sent by clairvoyant post & read by light,
For it brought me as much longing and delight.
This week’s Father’s Day; I’ve a long ride to Philly.
I’ll give this to Gramps, then head to Black Lily.