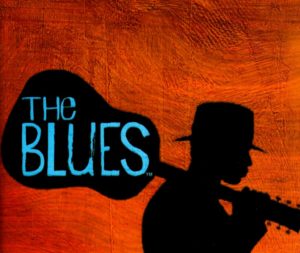 Here in New York City the weather has been bitterly cold over the past few days, and today it was gray and rainy. Has anyone been feeling down in the dumps lately because of weather? Kinda makes you want to sing the blues. And so today’s Thoughtful Thursday will feature just that–The Blues. Brought to you by Langston Hughes (1902 – 1967), renowned Harlem Renaissance writer and poet, and author of The Weary Blues. A few of the poems from The Weary Blues are presented below. Share these blues poems with your sons and daughters, read them aloud, sing them when it is called for, and enjoy.

Rocking back and forth to a mellow croon,

I heard a Negro play.

Down on Lenox Avenue the other night

By the pale dull pallor of an old gas light

He did a lazy sway…

He did a lazy sway…

To the tune o’ those Weary Blues.

With his ebony hands on each ivory key

He made that poor piano moan with melody.

Swaying to and fro on his rickety stool

He played that sad raggy tune like a musical fool.

Coming from a black man’s soul.

In a deep song voice with a melancholy tone

I heard that Negro sing, that old piano moan–

“Ain’t got nobody in all this world,

Ain’t got nobody but ma self

I’s gwine to quit my frownin’

And put ma troubles on the shelf.”

Thump, thump., thump, went his foot on the floor.

He played a few chords and then he sang some more–

“I got the Weary Blues

And I can’t be satisfied.

Got the Weary Blues

And can’t be satisfied–

I ain’t happy no mo’

And I wish that I had died.”

And far into the night he crooned that tune.

The stars went out and so did the moon.

The singer stopped playing and went to bed

While the Weary Blues echoed through his head.

He slept like a rock or a man that’s dead.

A sad song in de air.

A sad song in de air.

I wants to go somewhere.

I went down to de station.

Ma heart was in ma mouth.

Went down to de station.

Heart was in ma mouth.

Lookin’ for a box car

To roll me to de South.

‘S a terrible thing to have.

A terrible thing to have.

To keep from cryin’

I opens ma mouth an’ laughs.