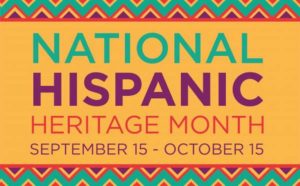 Did you know that National Hispanic Heritage Month began on September 15th and ends on October 15th?  And why, you may ask, does this celebration of the histories, cultures and contributions of Americans whose ancestors came from Spain, Mexico, the Caribbean and Central and South America start in the middle of one month and end in the middle of the next? (I certainly did).  And here is why:  This time period includes Independence day celebrations for  Costa Rica, El Salvador, Guatemala, Honduras and Nicaragua (September 15th), Mexico, (September 16), and Chile (September 18).  Also, Columbus Day, aka Indigenous People’s Day or Día de la Raza, which is October 14, falls within this 30 day period.  Whew, that is a lot to pack into one celebratory month.

So today’s Thoughtful Thursday honors National Hispanic Heritage Month with the works of young Hispanic poets from several regions.  First, “Poem In Which I Only Use Vowels”  is a list poem by Paola Capó-García.   Capó-García is a poet and translator from San Juan, Puerto Rico, whose soon-to-be-published book of poetry, Clap for Me That’s Not Me (Rescue Press, 2019) won the 2017 Black Box Poetry Prize.   Capó-García explains to poets.org why she wrote a list poem:  “…I wanted to create a list of ideas for poems I would never actually end up writing—a list of scenarios that felt like familiar expectations of poems (e.g., flowers, prettiness, wisdom) and some that mapped out my own anxieties about poetry. I wanted a claustrophobic poem that also felt open and endless, where the speaker’s identity could shift and shift and shift.”

The next poem is “Let Me Try Again” from Javier Zamora.  Zamora was born in La Herradura, El Salvador, in 1990, and he migrated to the United States in 1999. He received a BA from the University of California at Berkeley and an MFA from New York University. He has received numerous poetry fellowships, including from Stanford and Harvard Universities.  The final poem,  “I Walk in Every Room And Yell Where The Mexicans At”, is by José Olivarez,  a poet, educator and performer from Chicago, Illinois who now lives in New York City . He is the author of Citizen Illegal (Haymarket Books, 2018), winner of the 2018 Chicago Review of Books Poetry Prize, and co-editor of the forthcoming BreakBeat Poets Vol 4: LatiNEXT.

Poem In Which I Only Use Vowels

I could bore you with the sunset, the way water tasted
after so many days without it,
the trees,
the breed of dogs, but I can’t say
there were forty people
when we found the ranch with the thin white man,
his dogs,
and his shotgun.

Until this 5 a.m. I couldn’t remember
there were only five,
or seven people—

We’d separated by the paloverdes.
We, meaning:
four people. Not forty.
The rest. . .
I don’t know.
They weren’t there
when the thin white man
let us drink from a hose
while pointing his shotgun.
In pocho Spanish he told us
si correr perros atacar.
If run dogs trained attack.

When La Migra arrived, an officer
who probably called himself Hispanic at best,

not Mejicano like we called him, said
buenas noches
and gave us pan dulce y chocolate.

Procedure says he should’ve taken us
back to the station,

He must’ve remembered his family
over the border,

or the border coming over them,
because he drove us to the border

and told us
next time, rest at least five days,

He knew we would try again
and again,
like everyone does.

I Walk in Every Room And Yell Where The Mexicans At

i know we exist because of what we make. my dad works at a steel mill. he worked at a steel mill my whole life. at the party, the liberal white woman tells me she voted for hillary & wishes bernie won the nomination. i stare in the mirror if i get too lonely. thirsty to see myself i once walked into the lake until i almost drowned. the white woman at the party who might be liberal but might have voted for trump smiles when she tells me how lucky i am. how many automotive components do you think my dad has made. you might drive a car that goes and stops because of something my dad makes. when i watch the news i hear my name, but never see my face. every other commercial is for taco bell. all my people fold into a $2 crunchwrap supreme. the white woman means lucky to be here and not mexico. my dad sings por tu maldito amor & i’m sure he sings to america. y yo caí en tu trampa ilusionado. the white woman at the party who may or may not have voted for trump tells me she doesn’t meet too many mexicans in this part of new york city. my mouth makes an oh, but i don’t make a sound. a waiter pushes his brown self through the kitchen door carrying hors d’oeuvres. a song escapes through the swinging door. selena sings pero ay como me duele & the good white woman waits for me to thank her.