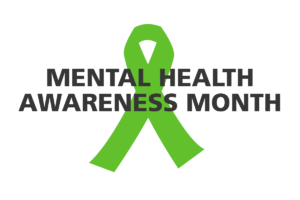 New month, new celebration: did you know that May is National Mental Health Awareness Month? Yep, since 1949 May has been designated Mental Health Month in the U.S. to raise awareness about the importance of mental health and to erase the stigma associated with mental health disorders. And a good thing, too, since we as a people (especially we African American people) have been slow to accept the need to focus on good mental health. Anxiety, depression and other mental health issues don’t discriminate: they affect people of all races, ages and social classes. Knowing that you need help and where to get it is a sign of courage and strength. Parents should be especially focused on their children’s mental health, and know when to call in help if it is needed.

All of the poems presented in today’s Thoughtful Thursday poetry are inspired by this month’s theme.  “The Rider” by Naomi Shihab Nye speaks of moving fast enough to leave loneliness in the dust. “Poem in Which I Only Use Vowels” by Paola Capo-Garcia  encourages the reader to think about the complex stories behind these simple phrases, stories in which anxiety and despair surely play a role. (This is an especially good one to read aloud and discuss with your high school children.)   And finally, “My Love is Black” by DéLana R.A. Dameron reminds us how anxiety can be so much a part of our daily lives.

A boy told me
if he roller-skated fast enough
his loneliness couldn’t catch up to him,
the best reason I ever heard for trying to be a champion.
What I wonder tonight pedaling hard down King William Street
is if it translates to bicycles.
A victory! To leave your loneliness
panting behind you on some street corner
while you float free into a cloud of sudden azaleas,
pink petals that have never felt loneliness,
no matter how slowly they fell.

Poem in Which I Use Only Vowels

My Love is Black

You might say fear
is a predictable emotion
I might agree. Whenever
my husband leaves
for his graveyard shift,
when he prepares to walk
out into the abyss of black
sky, I am afraid
tonight will be the night
I become a widow. I don’t
want to love like this. But
here we are: walking
hand in hand
in our parkas down
the avenues & he pulls away
from me. I might be
in some dreamy place,
thinking of the roast chicken
we just had, the coconut peas
& rice he just cooked,
& how the food has filled
our bellies with delight. How
many times can I speak
about black men
& an officer enters the scene?
I don’t want to love
like this. But there is a gun
in the holster & a hand
on the gun in the holster
& my husband’s hands
are no longer in his pockets
because it is night & we are
just trying to breathe in
some fresh evening air,
trying to be unpredictable, to
forget fear for a moment
& live in love & love.