What To America Is The Fourth of July?

What To America Is The Fourth of July? 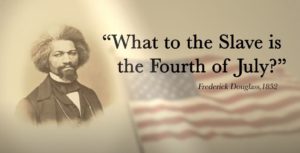 On July 5, 1852, Frederick Douglass gave a keynote address at an Independence Day celebration and asked, “What to the Slave is the Fourth of July?”.  He acknowledged the Founding Father’s ideals of freedom, but lamented that these ideals were painfully hypocritical in light of the existence of slavery in the U.S.

Five young descendants of Douglass recently gathered to read and respond to excerpts from this famous speech.  Watch this powerful and moving rendition, which reminds us that while we can celebrate the courage and bravery it took to create this nation, we can and should hold it accountable for the many contradictions in its history and injustices today. Those among us who consider themselves patriotic know that loving this country includes wanting to make it better, to make it the best that it can be. Share this video with your family as you commemorate Independence Day.