Tell Your Kids About the REAL “Green Book”: Watch “The GreenBook: Guide to Freedom” on the Smithsonian Channel

Home/Cultural, Entertainment, Featured, Latest News, Parents, Resources/Tell Your Kids About the REAL “Green Book”: Watch “The GreenBook: Guide to Freedom” on the Smithsonian Channel
Previous Next

Tell Your Kids About the REAL “Green Book”: Watch “The GreenBook: Guide to Freedom” on the Smithsonian Channel 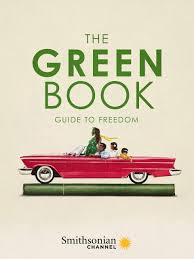 As you’ve probably heard, this year’s Best Picture Oscar went to the film “Green Book” on Sunday. This is the story of a white limo driver who discovers the existence of racism when he drives a touring black classical pianist around the Jim Crow era South. (A collective groan went up around our TV when this award was announced, as the Academy was giving its highest honor to a film which purports to be a groundbreaking look at race relations but is more the story of a white guy who defends a black guy against racism and thereby becomes a better person, and less about the black guy who is the target of the racism, but that is a topic for another post.)

One good thing about this film’s popularity is that attention can now be paid to the actual Green Book that gave the film its title. For almost 30 years, Victor Green’s “The Negro Motorist Green Book: an International Travel Guide” was a guide for black folks to use to find hotels, restaurants, gas, beauty parlors and other places that would welcome them as they traveled. The guide provided this information for black travelers not just in the Jim Crow South, but in all parts of the country (and ultimately outside the U.S. as well) to help them avoid the humiliation and/or danger of showing up where they were not welcome. And now thanks to documentary filmmaker Yoruba Richen and the Smithsonian Channel, we have the great opportunity to learn all about this guidebook and the circumstances surrounding its creation in the superb documentary “The Green Book: Guide to Freedom”.

“The Green Book: Guide to Freedom” tells the story of how the Green Book helped Black Americans travel for business and pleasure throughout the segregated United States in the 40’s, 50’s and 60’s. We learn of the many challenges of managing that travel, and discover the enterprising black businessmen and women who opened hotels and restaurants to meet the travelers’ needs. And as the civil rights movement forces the walls of segregation to tumble, giving Black Americans the right to go where they please, we see the decline of some of these establishments.

“The Green Book: Guide to Freedom” shines a much-needed spotlight on the Green Book’s existence, importance and legacy. Click here to find out how and when you can watch this show. View it with your children and talk with them about this important part of our history. This Green Book film is definitely worth watching.