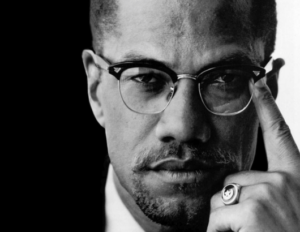 Fifty four years ago today, on February 21, 1965, activist and religious leader Malcolm X was assassinated by a member of the Nation of Islam while addressing his Organization of Afro-American Unity at the Audubon Ballroom in New York City.

Today’s Thoughtful Thursday pays tribute to Malcolm X, first with the stirring eulogy Ossie Davis delivered at his funeral.  Then, with a poem that speaks of the shock, sadness and anger that gripped Black America in the aftermath of his death:   “For Malcolm, A Year Later”, by Etheridge Knight.

Talk with your sons and daughters about Malcolm X.  Tell them, in the words of Malcolm X scholar Zaheer Ali, that “Malcolm X was an uncompromising advocate for the urban poor and working-class black America. Instead of advocating integration, he called for self-determination; instead of nonviolence in the face of violent anti-black attacks, he called for self-defense.” Tell them that during a June 1964 speech at the founding rally of his organization, Malcolm called for justice and equality for Black people “by any means necessary.”  Share this eulogy and these poems with your family.

“Here – at this final hour, in this quiet place – Harlem has come to bid farewell to one of its brightest hopes -extinguished now, and gone from us forever. For Harlem is where he worked and where he struggled and fought – his home of homes, where his heart was, and where his people are – and it is, therefore, most fitting that we meet once again – in Harlem – to share these last moments with him. For Harlem has ever been gracious to those who have loved her, have fought her, and have defended her honor even to the death.

It is not in the memory of man that this beleaguered, unfortunate, but nonetheless proud community has found a braver, more gallant young champion than this Afro-American who lies before us – unconquered still. I say the word again, as he would want me to : Afro-American – Afro-American Malcolm, who was a master, was most meticulous in his use of words. Nobody knew better than he the power words have over minds of men. Malcolm had stopped being a ‘Negro’ years ago. It had become too small, too puny, too weak a word for him. Malcolm was bigger than that. Malcolm had become an Afro-American and he wanted – so desperately – that we, that all his people, would become Afro-Americans too.

There are those who will consider it their duty, as friends of the Negro people, to tell us to revile him, to flee, even from the presence of his memory, to save ourselves by writing him out of the history of our turbulent times. Many will ask what Harlem finds to honor in this stormy, controversial and bold young captain – and we will smile. Many will say turn away – away from this man, for he is not a man but a demon, a monster, a subverter and an enemy of the black man – and we will smile. They will say that he is of hate – a fanatic, a racist – who can only bring evil to the cause for which you struggle! And we will answer and say to them : Did you ever talk to Brother Malcolm? Did you ever touch him, or have him smile at you? Did you ever really listen to him? Did he ever do a mean thing? Was he ever himself associated with violence or any public disturbance? For if you did you would know him. And if you knew him you would know why we must honor him.

Malcolm was our manhood, our living, black manhood! This was his meaning to his people. And, in honoring him, we honor the best in ourselves. Last year, from Africa, he wrote these words to a friend: ‘My journey’, he says, ‘is almost ended, and I have a much broader scope than when I started out, which I believe will add new life and dimension to our struggle for freedom and honor and dignity in the States. I am writing these things so that you will know for a fact the tremendous sympathy and support we have among the African States for our Human Rights struggle. The main thing is that we keep a United Front wherein our most valuable time and energy will not be wasted fighting each other.’ However we may have differed with him – or with each other about him and his value as a man – let his going from us serve only to bring us together, now.

Consigning these mortal remains to earth, the common mother of all, secure in the knowledge that what we place in the ground is no more now a man – but a seed – which, after the winter of our discontent, will come forth again to meet us. And we will know him then for what he was and is – a Prince – our own black shining Prince! – who didn’t hesitate to die, because he loved us so.”

For Malcolm,  A Year After

Compose for Red a proper verse;
Adhere to foot and strict iamb;
Control the burst of angry words
Or they might boil and break the dam.
Or they might boil and overflow
And drench me, drown me, drive me mad.
So swear no oath, so shed no tear,
And sing no song blue Baptist sad.
Evoke no image, stir no flame,
And spin no yarn across the air.
Make empty anglo tea lace words—
Make them dead white and dry bone bare.
Compose a verse for Malcolm man,
And make it rime and make it prim.
The verse will die—as all men do—
but not the memory of him!
Death might come singing sweet like C,
Or knocking like the old folk say,
The moon and stars may pass away,
But not the anger of that day.
Etheridge Knight
By groundcontrolparenting|2019-02-21T21:59:05-05:00February 21st, 2019|Cultural, Featured, Latest News, Motivators, Thoughtful Thursday, Uncategorized|0 Comments