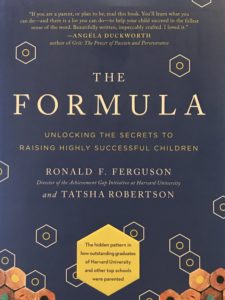 We’ve all heard about parenting styles that can hinder children’s success: the over involved parent, the distracted parent, the super protective parent.  But are there parenting styles that can help children become highly successful adults?  According to Harvard economist Ronald Ferguson and journalist Tatsha Robertson’s new book The Formula: Unlocking the Secrets to Raising Highly Successful Children, there are, and we can learn what they are and how to use them.

Ferguson, an MIT trained economist who has been teaching at Harvard for over 30 years, has been studying parent involvement in student achievement for many years. He is the director of the Achievement Gap Initiative, which focuses on closing the racial achievement gap.  GCP has been following his work for some time; my 2011 interview with him, “Dr. Ronald Ferguson: What Parents Can Do”  was one of our first posts.  And as award winning journalist Tatsha Robertson interviewed numerous successful people for various articles, she found herself focused on and fascinated by what role parents might have played in their success.

Ferguson and Robertson combined forces to explore this topic more deeply.  They conducted extensive interviews of highly successful people (graduates of Harvard and elsewhere) and their parents, in an effort to understand not only what the parents did, but why they parented as they did.  Ferguson and Robertson were hoping to find a pattern of behavior. They actually found 8 distinct parental roles that these parents, of varying racial and economic backgrounds, all  incorporated into their parenting style. Ferguson and Robertson determined that these eight parental roles, seen again and again, were the “formula for master parenting”.

Here is an overview of the 8 parental roles and how they work:

In addition to identifying these master parenting traits, Ferguson and Robertson sought to understand how master parents got that way.  They found that all of the master parents they interviewed were intensely determined to be great parents, and the motivation for this usually came out of something in their own histories.  Perhaps they didn’t want to repeat a parenting wrong they witnessed in their own childhood.  Perhaps they had a family legacy of some sort which they were determined to pass on to the next generation.  They all had a vision of the kind of people they wanted their children to become, and this inspired and guided their parenting.

Want to know more?  Me too!  I bought the book and am about to dive in, and I suggest you do the same. I found myself nodding in agreement with so many of these parenting roles described above; I can’t wait to read about them in detail, and will post again about this book once I’ve finished it.  In the meantime, for a bit more info, you can check out the Ferguson interview in the Harvard Gazette.

Looking forward to learning and talking more about The Formula!