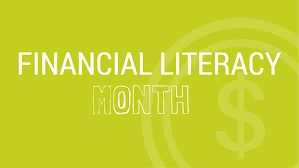 Did you know that April is Financial Literary Month?  (So many themes, only 12 months, some months have to do double duty.) In 2004 the U.S. Senate designated April as Financial Literary Month in an effort to encourage Americans to  establish and maintain healthy financial habits.   Since it is Financial Literacy Month, today’s Thoughtful Thursday features poems about money. But in a slight departure from the theme, these poems aren’t focused on how to manage money, but how it feels when you don’t have enough of it.

First we hear why “All Money Is A Matter of Belief” from Carmen Giménez Smith (b.1971), whose poetry often focuses on experiences and histories of Latina women.  Humberto Ak’Abal (1952-2019),  a Kʼicheʼ Maya poet from Guatemala who died earlier this year, describes “The Dance” we do with our finances.  Sherman Alexie (b.1966), best known among young people as the author of  The Absolutely True Diary of a Part-Time Indian tells of his “Victory” over temptation to steal what he couldn’t afford.  And finally, the wonderful Gwendolyn Brooks (1917-2000)  tells us the story of her family’s drive through the affluent “Beverly Hills, Chicago”.

Take turns reading these poems aloud with your middle and high school children.  Ask them what they think the poets are saying about money in their poems.  Talk about your own financial literacy, how you acquired it, (or how you are still working on acquiring it), and how important it is for your children to get smart about spending, monitoring and saving money.  (Get help on this by checking out the Goalsetter website, which is designed to help kids save.)

All Money Is A Matter of Belief

Every poet glistens with the dew
of money, but surely only some of them
truly have it. Never enough, wanting to know
what enough felt like, I buy fake versions
of the things I want on credit, my shelves
laden with zirconia, Prada knockoffs, and
pirated Oscar screeners. I’m driven by envy,
and gluttony, the desire to consume better
than anyone else, but the pleasure is only half
of what it should be, and so on until my house
is filled with objects that belong to Chase
and AmEx. I’ve been relentless and I’ve been
lucky, but that’s never been enough.
I’d sell my soul, but there aren’t any takers.

All of us dance
on a cent’s edge.

The poor—because they are poor—
lose their step,
and fall

and everyone else
falls on top.

When I was twelve, I shoplifted a pair
Of basketball shoes. We could not afford
Them otherwise. But when I tied them on,
I found that I couldn’t hit a shot.

When the ball clanked off the rim, I felt
Only guilt, guilt, guilt. O, immoral shoes!
O, kicks made of paranoia and rue!
Distraught but unwilling to get caught

Or confess, I threw those cursed Nikes
Into the river and hoped that was good
Enough for God. I played that season
In supermarket tennis shoes that felt

I couldn’t take the pain anymore, I told
My father what I had done. He wasn’t angry.
He wept out of shame. Then he cradled
And rocked me and called me his Little

Basketball Jesus. He told me that every cry
Of pain was part of the hoops sonata.
Then he laughed and bandaged my wounds—
My Indian Boy Poverty Basketball Stigmata.

“and the people live till they have white hair” –E.M. Price

The dry brown coughing beneath their feet,
(Only a while, for the handyman is on his way)
These people walk their golden gardens.
We say ourselves fortunate to be driving by today.

That we may look at them, in their gardens where
The summer ripeness rots. But not raggedly.
Even the leaves fall down in lovelier patterns here.
And the refuse, the refuse is a neat brilliancy.

When they flow sweetly into their houses
With softness and slowness touched by that everlasting gold,
We know what they go to. To tea. But that does not mean
They will throw some little black dots into some water and add sugar and the juice of the
cheapest lemons that are sold,

While downstairs that woman’s vague phonograph bleats, “Knock me a kiss.”
And the living all to be made again in the sweatingest physical manner
Tomorrow….Not that anybody is saying that these people have no trouble.
Merely that it is trouble with a gold-flecked beautiful banner.

Nobody is saying that these people do not ultimately cease to be. And
Sometimes their passings are even more painful than ours.
It is just that so often they live till their hair is white.
They make excellent corpses, among the expensive flowers….

Nobody is furious. Nobody hates these people.
At least, nobody driving by in this car.
It is only natural, however, that it should occur to us
How much more fortunate they are than we are.

It is only natural that we should look and look
At their wood and brick and stone
And think, while a breath of pine blows,
How different these are from our own.

We do not want them to have less.
But it is only natural that we should think we have not enough.
We drive on, we drive on.
When we speak to each other our voices are a little gruff.