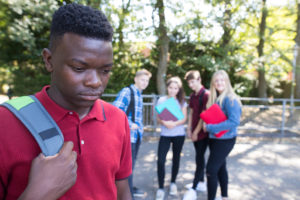 The NYT article “When a Black Student Plays Along With the K.K.K. Joke, What’s a College to Do?”, written by Ronald Crutcher, the (African American) president of the University of Richmond, details the aftermath of his discovery of an 1980 photo of U. Richmond white students dressed as Ku Klux Klansmen surrounding a grinning African American student posing with a noose around his neck. Crutcher was horrified by the image, but had some empathy for the Black student, as he recalled the difficulties of his journey through college on a predominantly white campus. He reached out to the Black student, who has agreed to return to campus all these years later to use that terrible moment in which he participated as a learning opportunity for current students.

This article and my disgust with the steady stream of racist commentary from our current president has me thinking that the days of a black kid being asked by friends to play along with a KKK joke may be far from over. What happens if/when our children, particularly those in more diverse school and social environments, find themselves on the receiving end of racially inappropriate comments from their peers? How will they handle it? What can we do to help them avoid pressure they may feel from their peers to be ok with racist behavior? A few thoughts:

1. Ask, don’t tell: The best way to understand how your children would deal with racially uncomfortable situations is to ask them. In a relaxed setting, with no obvious agenda. Resist the initial temptation to tell them how they should feel. If you are looking for a way into the conversation, maybe start with the question of whether they’ve ever witnessed a white friend saying or doing something racially insensitive.

2. Positive Reinforcement: Make sure they know the door is open to complain about anything that happens in school or in life in that makes them feel unsettled or saps their confidence. Let them know you have their back.

3. Arm Them With Our History: Take steps to make sure they understand the many contributions their ancestors have made to make this nation great. Beyond sports and entertainment. Do this not just in February, but every month. Make sure your bookshelves at home have books about Black pioneers. Text/Email your family articles about Black achievement, and talk about them. That way if your son’s classmate says to him “But you’re not really Black”, because your son is getting A’s, is a chess wiz or can’t dunk, your son can easily explain why this is a ridiculous and offensive comment.

4. No “Us” v.”Them”: Black kids in predominantly white schools (especially well resourced ones) may also have to guard against their classmate’s perception that they are one of the “good” (acceptable) people of color, versus the “bad” ones that their classmates don’t know or feel they have anything in common with. Chat with your sons and daughters about this phenomenon, and make sure they are prepared to push back against this offensive perspective.

4. Balance is Key: While you want your children to be able to respond to racial slights, you don’t want them to see every slight as racially based. Teach them to take a few moments to look at the situation from a few angles before coming to a conclusion about whether race is at issue.

4. Who’s in Their Crew?: Try to make sure they have at least friend of color in their social circle. Depending on the diversity in the school/neighborhood you may have to work to make sure that this happens but it is important that they are not always out there representing the entire race of non white people.