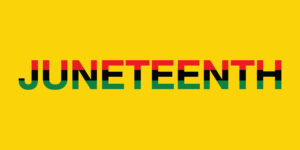 Did you celebrate Juneteenth with your family this year?  My father’s family is from Texas, so I grew up hearing about Juneteenth celebrations from Texas relatives, but my family didn’t celebrate it in NYC.  Fast forward to yesterday–Juneteenth celebrations were everywhere!  Some companies gave their employees the day off, social media exploded with Juneteenth graphics, memes and hashtags, and the press was filled with pictures of Black people across the nation parading, dancing, singing and being joyful, a welcome alternative to the months of focus on our anguish and sorrow.

Amidst all the celebrating, let’s make sure our children (and we) know the actual history of Juneteenth.  While many are calling it our freedom day,  there are actually many other anniversaries for celebrating emancipation, including the ratification of the 13th amendment abolishing slavery, which didn’t happen until December 6, 1865.  In an essay originally written for the Root.com,  Harvard professor Henry Louis Gates provides an in depth explanation of the Juneteenth holiday, which includes information about many of the other significant dates in the long and complicated road to emancipation.  For a more humorous take, watch Trevor Noah’s explanation of Juneteenth here.

Once you’ve got Juneteenth history down, why not move on to other less well known moments in African American history?  Some suggestions:  The Greenwood Massacre in Tulsa, OK, where as many as 300 people were killed when a white mob attacked a black community and burned to the ground; Seneca Village, a thriving African American community which was located in what is now Central Park, Weeksville, an historic neighborhood founded by free African Americans in 1838.  Or get a copy of 100 Amazing Facts About the Negro, Henry Louis Gate’s recent update of J. Rogers legendary work, and enjoy discovering lots of fascinating tidbits of African-American history.

Let’s let all the  Juneteenth celebrations inspire us to know more of our history!