Take Your Family To See HARRIET This Weekend!!!

Take Your Family To See HARRIET This Weekend!!! 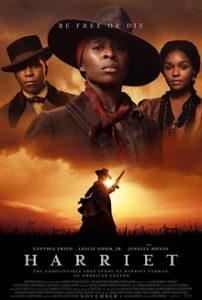 GCP has been off the grid for a few weeks but we just had to pop back in today to say Run, Don’t Walk, to see the great new movie HARRIET which is opening in theaters nationwide tomorrow, November 1!!! We saw it when it premiered at the Toronto Film Festival, and it is an exciting and inspirational film that you and your children (especially 7th graders and older) will really enjoy.  Cynthia Erivo is absolutely wonderful as Harriet (the Oscar buzz has already begun) and it is thrilling to watch her portray this courageous and tenacious American hero.

The supporting cast, which features Leslie Odom, Jr. and Janelle Monáe, is also superb.  Directed by Kasi Lemmons (“Eve’s Bayou”), produced by Debra Martin Chase and Daniela Taplin Lundberg, this one is a must see.  Check out the trailer below.  Let’s support this film this opening weekend and make it a hit!