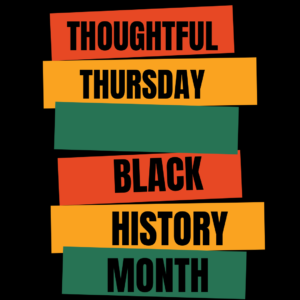 On this Thoughtful Thursday we celebrate Black History Month with poetry by and/or about Black people. (Actually, we celebrate pretty much every month this way, but we’ll jump on the BHM bandwagon for February.).  Today we offer a variety of poems which all nod to the theme of sharing Black History, including our cultural history, with our children.

We start with “Eddie Priest’s Barber Shop and Notary”, by Kevin Young (b. 1970), which so beautifully places us in the neighborhood barber shop, waiting our turn in the chair.  Next we have “The Gospel of Barbecue” by Honorée Fanonne Jeffers (b.1967), an ode to an uncle’s love for and mastery of barbecue.  In the next poem, “The Fifth Fact” by Sarah Browning (b. circa 1963),  a mother describes how her son’s history project on Harriet Tubman prompts her to reflect upon how history lives all around us.  Browning, who  is not Black,  describes herself as “a middle-class white girl who grew up [on the South Side of Chicago] surrounded by Black people, who had Black friends from nursery school on, who was frequently the only white person in the room, in the house, at the party, on the bus, who had no idea this was unusual for a white person in America.”

And finally, a poem from Langston Hughes (1902-1967), “I, Too, Sing America”, in which he laments the cruelty of segregation and longs for the day that all of America recognizes “how beautiful I am”.  This poem can help our children understand that Black people have struggled and fought and made great progress in America, and that there is much more progress to be made.

The Gospel of Barbecue

Long after it was
necessary, Uncle
Vess ate the leavings
off the hog, doused
them with vinegar sauce.
He ate chewy abominations.
Then came high pressure.
Then came the little pills.
Then came the doctor
who stole Vess’s second
sight, the predication
of pig’s blood every
fourth Sunday.
Then came the stillness
of barn earth, no more
trembling at his step.
Then came the end
of the rib, but before
his eyes clouded,
Uncle Vess wrote
down the gospel
of barbecue.

Chapter one:
Somebody got to die
with something at some
time or another.

Chapter two:
Don’t ever trust
white folk to cook
your meat until
it’s done to the bone.

Chapter three:
December is the best
time for hog killing.
The meat won’t
spoil as quick.
Screams and blood
freeze over before
they hit the air.

Chapter four, Verse one:
Great Grandma Mandy
used to say food
you was whipped
for tasted the best.

Chapter four, Verse two:
Old Master knew to lock
the ham bacon chops
away quick or the slaves
would rob him blind.
He knew a padlock
to the smokehouse
was best to prevent
stealing, but even the
sorriest of slaves would
risk a beating for a full
belly. So Christmas time
he give his nasty
leftovers to the well
behaved. The head ears
snout tail fatback
chitlins feet ribs balls.
He thought gratitude
made a good seasoning.

For Ben’s project he must research five facts
about his African-American hero and write them
on poster board. He chooses Harriet Tubman,
whose five facts are: Her father’s name was Ben.
Her mother’s name was Old Rit. She was born
in 1820 and died in 1913. She was born in Maryland
and died in New York. Ben asks for advice
about his fifth fact and I suggest: She led more than
300 people to freedom. Ben sighs the way he does
now and says, Everyone knows that, Mom.

On summer mornings, Lincoln rode his horse
to work down the Seventh Street Turnpike
close to my new home. Down Georgia Avenue
past The Hunger Stopper and Pay Day 2 Go and liquor
stores and liquor stores. Past Cluck-U-Chicken
and Fish in the ‘Hood and Top Twins Faze II
Authentic African Cuisine and the newish Metro station
and all those possibilities gleaming in developers’ eyes.

There goes Lincoln’s horse down Georgia Avenue
from the Soldier’s Home to the White House –
much cooler up here in the country, in the neighborhood,
at the hospital. And there’s Walt Whitman, the sworn poet
of every dauntless rebel the world over, hanging around
his street corner every morning to bow to the president
at Thomas Circle by the homeless guys. It’s 100 years now
since any president summered at the Soldier’s Home.
But I was born only 50 years after Harriet Tubman died,
all the centuries we drag into the next century and the next.

Writing here, in my new neighborhood, the city old
and new around me, I see Harriet Tubman
and Lincoln and Uncle Walt and the true stories
and sometimes our own despair like Washington’s
summer malaria, her 40 war hospitals, Whitman moving
from bed to bed, stroking the hair of so many dying boys.

North up Georgia Avenue in our own soldiers’ home –
Walter Reed – the boys and now girls too
mourn the ghosts of their own legs and arms
and our capacity for love. Where is their
sworn poet? Harriet Tubman born
so close. All these heroes under our feet.

I Too, Sing America

I, too, sing America.

I am the darker brother.
They send me to eat in the kitchen
When company comes,
But I laugh,
And eat well,
And grow strong.

Tomorrow,
I’ll be at the table
When company comes.
Nobody’ll dare
Say to me,
“Eat in the kitchen,”
Then.

Besides,
They’ll see how beautiful I am
And be ashamed—