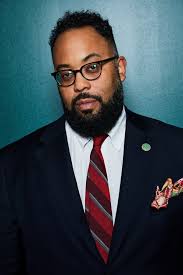 It’s Thoughtful Thursday! Today we are celebrating one of our favorite poets, Kevin Young. In case you hadn’t heard, Kevin Young has just been named as the new director of the National Museum of African American History and Culture. He will be leaving his position as the head of the Schomberg Center for Research in Black Culture, a division of the New York Public Library, a position he has held for four years. He also serves as poetry editor at The New Yorker magazine, and will continue in that role in his new position.

Congrats to Kevin, and we can’t wait to see what he does at the National Museum of African American History and Culture! In the meantime, here are some of our favorite poems from Kevin. Share them with your children and enjoy.

RUN AWAY from this sub-
scriber for the second time
are TWO NEGROES, viz. SMART,
an outlandish dark fellow

with his country marks
on his temples and bearing
the remarkable brand of my
name on his left breast, last

seen wearing an old ragged
negro cloth shirt and breeches
made of fearnought; also DIDO,
a likely young wench of a yellow

cast, born in cherrytime in this
parish, wearing a mixed coloured
coat with a bundle of clothes,
mostly blue, under her one good

arm. Both speak tolerable plain
English and may insist on being
called Cuffee and Khasa respect-
ively. Whoever shall deliver

the said goods to the gaoler
in Baton Rouge, or to the Sugar
House in the parish, shall receive
all reasonable charges plus

a genteel reward besides what
the law allows. In the mean
time all persons are strictly
forbid harbouring them, on pain

of being prosecuted to the utmost
rigour of the law. Ten guineas
will be paid to anyone who can
give intelligence of their being

harboured, employed, or enter-
tained by a white person upon
his sentence; five on conviction
of a black. All Masters of vessels

are warned against carrying them
out of state, as they may claim
to be free. If any of the above
Negroes return of their own

accord, they may still be for-
given by
ELIZABETH YOUNG.

The honey bees’ exile
is almost complete.
You can carry

them from hive
to hive, the child thought
& that is what

he tried, walking
with them thronging
between his pressed palms.

Let him be right.
Let the gods look away
as always. Let this boy

who carries the entire
actual, whirring
world in his calm

unwashed hands,
barely walking, bear
us all there