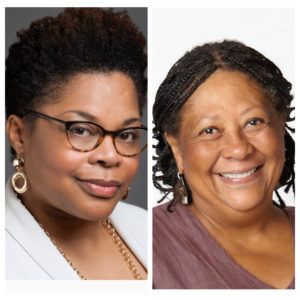 Today’s Thoughtful Thursday features two award-winning African American female poets whose work is new to us, although these poets have been heralded for some time by (better read) poetry fans worldwide.

Crystal Williams, a Detroit native, has written four award-winning poetry collections.  A graduate of NYU (undergrad) and Cornell University (M.F.A.), Williams has taught at several universities and managed their offices of  diversity and inclusion.  Currently she is the associate provost for diversity and inclusion at Boston University, where she is also a professor of English.  Her poem, ” A Voice of God (Poem for Aretha Franklin)” is a praise song to the Queen of Soul.

Today we feature two poems from Dr. Nelson.  In “Moonlily”, she delightfully describes a young girl experiencing recess as a young horse at play.  Her next poem, “Worth”, imagines a young African American student in school in 1833-34.  This poem is included in “Miss Crandall’s School for Young Ladies and Little Misses of Color”,  a book of poetry for young adults which she co-wrote with the celebrated poet Elizabeth Alexander to tell  the (true) story of Prudence Crandall, who established the first school for black girls in the U.S.

We love discovering new great work!  (Although this work is not new to many, it is new to us, and perhaps to you as well.)  Share these poems with your children and enjoy.

The Voice of God

When we play horses at recess, my name
is Moonlily and I’m a yearling mare.
We gallop circles around the playground,
whinnying, neighing, and shaking our manes.
We scrape the ground with scuffed saddle oxfords,
thunder around the little kids on swings
and seesaws, and around the boys’ ball games.
We’re sorrel, chestnut, buckskin, pinto, gray,
a herd in pastel dresses and white socks.
We’re self-named, untamed, untouched, unridden.
Our plains know no fences. We can smell spring.
The bell produces metamorphosis.
Still hot and flushed, we file back to our desks,
one bay in a room of palominos.

Today in America people were bought and sold:
five hundred for a “likely Negro wench.”
If someone at auction is worth her weight in gold,
how much would she be worth by pound?  by ounce?
If I owned an unimaginable quantity of wealth,
could I buy an iota of myself?
How would I know which part belonged to me?
If I owned part, could I set my part free?
It must be worth something—maybe a lot–
that my great-grandfather, they say, killed a lion.
They say he was black, with muscles as hard as iron,
that he wore a necklace of the claws of the lion he’d fought.
How much do I hear, for his majesty in my blood?
I auction myself.  And I make the highest bid.