Protecting Our Sons from Online Sextortion

Protecting Our Sons from Online Sextortion 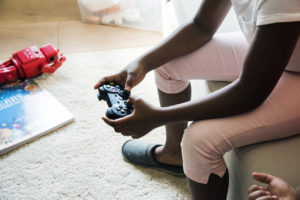 Let’s face it, unless you happen to be a gamer yourself it is easy to take a fairly hands-off approach to your son’s gaming habits. You probably have set limits on screen time, maybe you’ve banned games that are too violent or otherwise disturbing.  But here’s why you should pay closer attention to his gaming activity:  to keep him safe from online sexual predators.  With 97% of American teen boys playing video games (per Pew Center research) and black and brown boys playing video games for longer average periods of time than their white peers (per Common Sense Media research), this is an issue we should not and cannot ignore. (Girls are gamers too, but because boys are generally much more focused on video games they are the focus here. If you’ve got a daughter hooked on video games by all means read on!)

A recent NY Times article spelled out in chilling detail how sexual predators have been easily able to enter the lives of young people online via multiplayer video games, posing as peer players.  Once these predators have established an online relationship, they’ve tricked children in to sharing nude and/or sexually explicit photos and videos of themselves, which they then use as blackmail for more graphic images for their use and distribution.  Children are reluctant to tell adults what is going on because of the threats, (e.g., predators threaten to send the pics to the child’s friends or their school or even threaten physical harm if they don’t cooperate further ).  And while online gaming platforms and chat sights are aware of the issue and some warn users to be careful when they are talking to strangers, their games thrive on enabling players to talk with one another, so they aren’t inclined to restrict online communication.

Don’t freak out; do pay attention.  Reading about some of the awful things that predators have done may make you want to throw the gaming system out of the window, but that is not the answer. (Your son will just play at a friend’s house.)  If you are a video game ostrich,  pull your head out of the sand and work on understanding the basics of gaming.  Ask your son to give you a tutorial, and show you how his favorite game works.  Watch him play; play with him.  Let him show you how the online component works.  Show actual interest (don’t ask him to show you just so you can look for predators–good way to shut things down between the two of you pretty quickly).  And by the way, there are multiplayer games for children as young as 6 in which players can communicate online, so this is not something you should put off until your son gets to middle school. Go to Common Sense Media to learn about new games and read their ratings.

Set the rules.  Once you understand how the games work, set some rules for your son’s interaction with others while playing.  Depending on his age, the rules can include no online talking at all, no talking to strangers (just friends where you can verify that they are actually playing the game), never agree to continue talking with a player away from the game on another platform (e.g., Instagram, Kik, etc.); never take off any clothing while playing (the younger kids may need this explicit rule); never send any pictures to people you’ve met online while playing; basically, don’t do anything that you wouldn’t do with a stranger in broad daylight on the street. Discuss these rules with him; don’t just bark them and expect him to comply.  Keeping an open dialogue is key.

Encourage communication.  Encourage your son to talk with you if anything weird or unusual happens while he is playing online.  Talk about what your son can do if he is in an uncomfortable situation on line;  make sure he has tools to get out of it.  Explore apps together to find out how to report and block users who make him feel unsafe.  The conversations on line may veer towards sex;  be prepared that you will need to talk with your son about this in a way that doesn’t make either of you uncomfortable.  Should he tell you about something that has happened, avoid sounding panicked or judgmental.  Promise him that you will not get angry with him or that he will get in trouble; the important thing is to listen to what has happened and figure out next steps. If blocking the person isn’t effective, contact your local precinct.

Don’t freak out; do vow to be your son’s online protector.  The “don’t freak out” advice needs repeating because the temptation to run screaming from this gaming world (if you are not a gamer) gets stronger when you learn about what bad actors in this world can do. But you can and should take a more positive approach.  This is an opportunity to open a window into your son’s world a little bigger (a good thing), to learn about something that he really enjoys (another good thing), and a chance to help him ensure that he continues to play in a safe environment.  Take advantage of it!

Any of you gamers out there, can you share how you help your sons deal with a world that you know well?