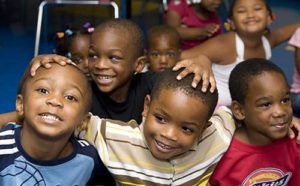 For today’s Thoughtful Thursday we return to our roots with poems for Black boys.  Our inspiration:  Did you hear about the 10 year old Black boy who faced criminal aggravated assault charges after an elementary school dodgeball game?  A (white) classmate was injured after being struck in the head with a ball the boy threw during the game. The classmate, who suffered a concussion, had a medical condition that makes head injuries particularly dangerous. The boy was suspended for school for a day. He and his family later learned that he was being charged after a police report had been filed.  Yesterday prosecutors announced that they are dropping the charges against the young boy.

A ten year old boy facing criminal charges after a schoolyard game?  Did anyone stop to think of the psychological toll of his having to face criminal charges?  Sure the injured child’s parent was angry, but involving the police with a ten year old boy ‘s actions on a schoolyard playground suggests an irrational fear and anger.  As we’ve noted in an earlier GCP post, a 2014 study has shown that black boys are seen as more likely to be perceived as guilty (within a criminal justice context) than white boys, and are frequently mistaken to be older than their age relative to peers of other races. Can’t help but think this was a factor here.

The boy’s mother had legal representation and the charges were dropped, thank goodness.  But what if she had not had the resources or presence of mind to engage legal counsel?

So for today’s Thoughtful Thursday we needed to work through this with poetry.  We start with Danez Smith’s “Not an Elegy for Mike Brown”, which laments the regularity with which tragedy visits our black boys.  We then move to Toi Derricote’s “Black Boys Play the Classics”,  in which the world gets to see black boys in a different light.  And we end with Effie Lee Newsome’s “The Bronze Legacy”, which heralds the nobility of our boys.  Newsome, born in 1885,  was one of the first African American poets who primarily published poems for children.  She wrote “The Bronze Legacy” in 1922, and we need our sons to hear it now more than ever.

Share these poems with your sons and daughters and hug them tightly.  Enjoy.

Not an Elegy for Mike Brown

I am sick of writing this poem
but bring the boy. his new name

his same old body. ordinary, black
dead thing. bring him & we will mourn
until we forget what we are mourning

& isn’t that what being black is about?
not the joy of it, but the feeling

you get when you are looking
at your child, turn your head,
then, poof, no more child.

think: once, a white girl

was kidnapped & that’s the Trojan war.

later, up the block, Troy got shot
& that was Tuesday. are we not worthy

of a city of ash? of 1000 ships
launched because we are missed?

always, something deserves to be burned.
it’s never the right thing now a days.

I demand a war to bring the dead boy back
no matter what his name is this time.

I at least demand a song. a song will do just fine.

look at what the lord has made.
above Missouri, sweet smoke.

The most popular “act” in
Penn Station
is the three black kids in ratty
sneakers & T-shirts playing
two violins and a cello—Brahms.
White men in business suits
have already dug into their pockets
as they pass and they toss in
a dollar or two without stopping.
Brown men in work-soiled khakis
stand with their mouths open,
arms crossed on their bellies
as if they themselves have always
wanted to attempt those bars.
One white boy, three, sits
cross-legged in front of his
idols—in ecstasy—
their slick, dark faces,
their thin, wiry arms,
who must begin to look
like angels!
Why does this trembling
pull us?
A: Beneath the surface we are one.
B: Amazing! I did not think that they could speak this tongue.
Toi Derricote (b.1941)

To be brown like thrush and lark!
Like the subtle wren so dark!
Nay, the king of beasts wears brown;
Eagles are of this same hue.
I thank God, then, I am brown.
Brown has mighty things to do.