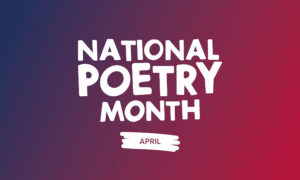 Since you are primarily in charge of teaching your children these days, why not teach them some poetry?  April is Poetry Month, after all.  In today’s Thoughtful Thursday we will look at three poems by African American poets (all women, in fact), which you and your children can enjoy learning about and discussing.

If you need some motivation to include poetry in your lesson plans, you’ll find it in this excerpt from an essay written by Jacqueline Woodson, renowned poet and children’s book author, who wrote this in 2015 when she was the Young People’s Poet Laureate:

I used to be afraid of poetry. I thought it was some secret code only certain people were supposed to understand… But I know now that poetry belongs to all of us.

I struggled to read as a child. Sometimes, words circled around my brain in confusing ways. So I had to read the same lines over and over until the poem or story or essay became a part of me. And made sense.

This is how one becomes a writer—by reading slowly and re-reading. By studying the way a poet breaks a line or finds a clever rhyme or makes you smile. What words were just used? Hey! How did they do that? Go back and read it again.

Once I was afraid of poetry. I didn’t think it belonged to me. But as I said, poetry belongs to all of us. As Young People’s Poet Laureate, my hope is to share the joy of poetry, to get you to write, speak, think about poetry everyday. Poetry takes many forms—including the form YOU give it.

Take a look at the three poems below.  If you like any and think your children might as well, take a few minutes to go www.poetryfoundation.org (the source of all of these poems) and read about the poet and her style of writing poetry. Think about what appeals to you about the work.  Then share it with your children, and see what they discover, and what more you can discover together.

The Poetry Foundation site has lots of articles about teaching poetry, and two “rules” that we found in one seem pretty useful:

All Poems Raise Questions; Only Some Have Answers: Poetry–like life– doesn’t always offer clear solutions to the problems it describes.  Sometimes all it can do is describe.

Poetry is an Art Form: it’s an artistic practice, it’s art to be absorbed and pondered and appreciated, (or not).

In other words, the best way to teach poetry under these circumstances is to share these poems with your children, talk about how they make you all feel and why, and enjoy.

To Catch A Fish

This is for the Pullman Porters who organized when people said
they couldn’t. And carried the Pittsburgh Courier and the Chicago
Defender to the Black Americans in the South so they would
know they were not alone. This is for the Pullman Porters who
helped Thurgood Marshall go south and come back north to fight
the fight that resulted in Brown v. Board of Education because
even though Kansas is west and even though Topeka is the birth-
place of Gwendolyn Brooks, who wrote the powerful “The
Chicago Defender Sends a Man to Little Rock,” it was the
Pullman Porters who whispered to the traveling men both
the Blues Men and the “Race” Men so that they both would
know what was going on. This is for the Pullman Porters who
smiled as if they were happy and laughed like they were tickled
when some folks were around and who silently rejoiced in 1954
when the Supreme Court announced its 9—0 decision that “sepa-
rate is inherently unequal.” This is for the Pullman Porters who
smiled and welcomed a fourteen-year-old boy onto their train in
1955. They noticed his slight limp that he tried to disguise with a
doo-wop walk; they noticed his stutter and probably understood
why his mother wanted him out of Chicago during the summer
when school was out. Fourteen-year-old Black boys with limps
and stutters are apt to try to prove themselves in dangerous ways
when mothers aren’t around to look after them. So this is for the
Pullman Porters who looked over that fourteen-year-old while
the train rolled the reverse of the Blues Highway from Chicago to
St. Louis to Memphis to Mississippi. This is for the men who kept
him safe; and if Emmett Till had been able to stay on a train all
summer he would have maybe grown a bit of a paunch, certainly
lost his hair, probably have worn bifocals and bounced his grand-
children on his knee telling them about his summer riding the
rails. But he had to get off the train. And ended up in Money,
Mississippi. And was horribly, brutally, inexcusably, and unac-
ceptably murdered. This is for the Pullman Porters who, when the
sheriff was trying to get the body secretly buried, got Emmett’s
body on the northbound train, got his body home to Chicago,
where his mother said: I want the world to see what they did
to my boy. And this is for all the mothers who cried. And this is
for all the people who said Never Again. And this is about Rosa
Parks whose feet were not so tired, it had been, after all, an ordi-
nary day, until the bus driver gave her the opportunity to make
history. This is about Mrs. Rosa Parks from Tuskegee, Alabama,
who was also the field secretary of the NAACP. This is about the
moment Rosa Parks shouldered her cross, put her worldly goods
aside, was willing to sacrifice her life, so that that young man in
Money, Mississippi, who had been so well protected by the
Pullman Porters, would not have died in vain. When Mrs. Parks
said “NO” a passionate movement was begun. No longer would
there be a reliance on the law; there was a higher law. When Mrs.
Parks brought that light of hers to expose the evil of the system,
the sun came and rested on her shoulders bringing the heat and
the light of truth. Others would follow Mrs. Parks. Four young
men in Greensboro, North Carolina, would also say No. Great
voices would be raised singing the praises of God and exhorting
us “to forgive those who trespass against us.” But it was the
Pullman Porters who safely got Emmett to his granduncle and it
was Mrs. Rosa Parks who could not stand that death. And in not
being able to stand it. She sat back down.

Imagine a child at your door,
offering to do your wash,
clean your house, cook,
to weed your kitchen garden
or paint you a bunch of flowers
in exchange for a meal.
A spindly ten-year-old, alone
and a stranger in town, here to go
to our school for colored children.
His high peep brought tears:
sleeping in a barn and all that,
nary mama nor kin,
but only white folks
he left with their blessing,
his earthly belongings
in a handkerchief tied to a stick.

I’ve brought a houseful of children
into this world, concentrating on
that needle’s eye into eternity.
But ain’t none of them children mine.
Well, of course I moved him on in.
He helped me with my washings,
brought me roots from the woods
that bleached them white folks’ sheets
brighter than sunshine. He could fill
a canning jar with leaves and petals
so when you lifted the lid
a fine perfume flooded your senses.
White bodices and pantalettes danced
around George on my line.

He was sweet with the neighbor children.
Taught the girls to crochet.
Showed the boys
a seed he said held a worm
cupped hands warmed so it wriggled and set
the seed to twitching.
Gave them skills and wonders.
Knelt with me at bedtime.

He was the child the good Lord gave
and took away before I got more
than the twinkle of a glimpse
at the man he was going to be.
It happened one Saturday afternoon.
George was holding a black-eyed Susan,
talking about how the seed
this flower grew from
carried a message from a flower
that bloomed a million years ago,
and how this flower
would send the message on
to a flower that was going to bloom
Praise Jesus, I’ll never forget it.

He left to find a teach that knew
more than he knew.
I give him my Bible.
I keep his letters
in the bureau, tied with a bow.
He always sends a dried flower.

*GCP note: Mariah Watkins, born a slave in North Carolina around 1824, was (illegally) taught to read and write as a child.  After the Civil War she moved to Neosho, Missouri, near an African American school.  One day she found George Washington Carver, who had walked the 8 miles to Neosho to start school, asleep on her property.  She allowed him to live with her and her husband in exchange for chores.  She gave Carver a Bible and taught him to read it.  He carried that Bible with him for the rest of his life.