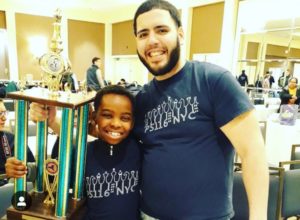 We were all heartened to learn how 8 year old Tanitoluwa Adewumi  became a state wide chess champion while living with his family in a homeless shelter. And now the news gets even better. Nicholas Kristof, the New York Times columnist who broke Tani’s story, reports in a recent update that thanks to the generosity of people who read the initial story the Adewumi family have been able to move out of the shelter into an apartment. Tani now has a home.

The philanthropic response to Tani’s story was quick and mighty. The GoFundMe account set up last week for Tani has ballooned to over $240,000. Offers of scholarships to private schools have poured in. Immigration lawyers have volunteered their services to help the family in their quest for asylum here. Several readers offered housing. Film companies want to make a movie about Tani.

While some families would be overwhelmed by these generous offers, the Adewumi family has stayed grounded and thoughtful in their responses. They accepted one donor’s offer to pay a year’s rent on a two bedroom apartment near Tani’s school. Mr. Adewumi has accepted a donor’s offer of a free car so he can keep more of the money he makes in his second job driving for Uber. Mrs. Adewumi has been offered a job as a health care aide at a hospital. They have decided to keep Tani at P.S. 116 through elementary school, because as Tani’s mother notes, “This school showed confidence in Tanitoluwa, so we return the confidence.”

And in a particularly impressive move, the Adewumi family has decided not to use any of the monies from the GoFundMe account for themselves. After tithing 10 percent to their church, which helped them while they were homeless, they will use the rest of the funds to help other African immigrants struggling to make a way in the U.S., through the newly created Tanitoluwa Adewumi Foundation.

As Nicholas Kristof wisely notes, “Tani thrived because everything fell into place: a good school, a dedicated chess teacher and devoted parents committed to taking their son to every chess practice. The challenge is to replicate that supportive environment for all the other Tanis out there with public services and private philanthropy alike.”

Homeless just a week ago, Tani’s parents Kayode and Oluwatoyin Adewumi are already working on creating a supportive environment for others in need.  They are setting a wonderful example for their children and for us all.