Today’s Thoughtful Thursday offerings are inspired by “Beastly Boys and Ghastly Girls”, a book of humorous poetry about naughty, ill-mannered, even cruel, boys and girls. (It is a great book; hard to find, but worth picking it up if you can locate one.) Most of the poems below are from Shel Silverstein (the author of “The Giving Tree”), who made many contributions to the “Beastly Boys and Ghastly Girls” collection. Nothing like some delightfully naughty poetry to spark a young boy’s imagination and feed a wicked sense of humor. Enjoy! 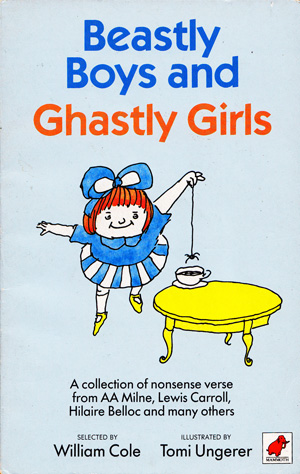 Nothing to do?
Nothing to do?
Put some mustard in your shoe,
Fill your pockets full of soot,
Drive a nail into your foot,
Put some sugar in your hair,
Place your toys upon the stair,
Smear some jelly on the latch,
Eat some mud and strike a match,
Draw a picture on the wall,
Roll some marbles down the hall,
Pour some ink in daddy’s cap –
Now go upstairs and take a nap.

In the family drinking well
Willie pushed his sister Nell.
She’s there yet, because it kilt her –
Now we have to buy a filter.

Jimmy Jet and His TV Set

I’ll tell you the story of Jimmy Jet—
And you know what I tell you is true.
He loved to watch his TV set
Almost as much as you.

He watched all day, he watched all night
Till he grew pale and lean,
From “The Early Show” to “The Late Late Show”
And all the shows between.

He watched till his eyes were frozen wide,
And his bottom grew into his chair.
And his chin turned into a tuning dial,
And antennae grew from his hair.

And his brains turned into TV tubes,
And his face to a TV screen.
And two knobs saying “VERT.” and “HORIZ.”
Grew where his ears had been.

And he grew a plug that looked like a tail
So we plugged in little Jim.
And now instead of him watching TV
We all sit around and watch him.