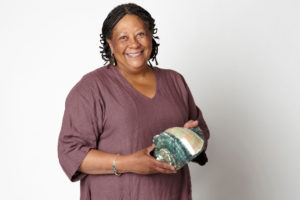 Today’s Thoughtful Thursday features the poems of Marilyn Nelson, whose work we first featured in December 2019 . Marilyn Nelson was born in Cleveland, Ohio and was raised on several military bases, as her father was in the Air Force. Dr. Nelson, who began writing poetry in elementary school, earned her BA from the University of California, Davis, a masters  from the University of Pennsylvania  and her doctorate from the University of Minnesota.  She has published many award-winning books of poetry, and she has also published collections of verse for children and young adults. From 2001–2006, she served as the Poet Laureate of Connecticut.  In 2013, Dr. Nelson was elected a Chancellor of the Academy of American Poets. Since 1978 she has taught at the University of Connecticut, Storrs, where she is a professor emerita of English.

In “1905”, which is the year that Einstein published his theory of relativity,  Dr. Nelson writes of another important but lesser known scientist, Dr. George Washington Carver. She invites us to join Dr. Carver in 1905 as he takes his scientific discoveries to the people who need them.   In “Land Owner”, she reveals how a Black businessman cleverly conducted business in 1825.

And finally, “Mama’s Promise” catapults us into the mind of a mother facing the realization that as much as she loves and wants to protect her child, his fate is ultimately out of her control. This is a feeling many of us grapple with as we worry about our families these days, and Dr. Nelson gives voice to it so beautifully.

Share these poems with your children (especially the first two; make sure they can handle “Mama’s Promise” before sharing) and enjoy.

Looking out of the front page, a wild-haired,
gentle-eyed young German man stands
before a blackboard of incomprehensible equations.
Meanwhile, back in the quotidian,
Carver takes the school to the poor.

He outfits an open truck
with shelves for his jars
of canned fruit and compost,
bins for his croker sacks of seeds.
He travels roads barely discernible
on the county map,
teaching former field-slaves
how to weave ditch weeds
into pretty table place mats,
how to keep their sweet potatoes from rotting
before winter hunger sets in,
how to make preacher-pleasing
mock fried chicken
without slaughtering a laying hen.
He notes patches of wild chicory
the farmers could collect
to free themselves from their taste
for high-priced imported caffeine.

He and his student assistants bump along
shoulder to shoulder in the high cab,
a braided scale of laughter
trailing above their raised dust.

Today, Carver is explaining,
as far as he understands it,
that fellow Einstein’s “Special Theory of Relativity.”
He’s hardly gotten to Newtonian Space
when a platoon of skinny dogs
announces the next farm.

As they pull up,
a black man and his boy straighten,
two rows of shin-high cotton apart.
With identical gestures they remove
straw hats, wipe their foreheads with their sleeves.
Their welcoming glance meets Carver’s eyes
at the velocity of light.

There ain’t nothing shameful about good, honest work.
It’s a proud man that comes home with a decent wage.
I keep my head down. I listen when rich folks talk.
The finer the leather, the wiser the financial sage.

One foot on my box, Mister Man stands tapping The News
on his knee, talking shop confidentially with a friend.
I wipe off the filth, then, with a clean rag, smooth
his boot with lampblack, beeswax, and lanolin.

I deal merchandise shipped in on the Erie Canal.
Buy low, sell high. Then buy land, for the right to vote.
(You massage through his boot; caress his toes, his heel: if you’re lucky, he’ll say what’s coming on tomorrow’s boat.)

Thanks to dropped tips, I’m a bootblack with his own place.
I may bow at their knees, shushing with the horsehair brush,
but I buff with spit on a rag to a mirrored face
aflame with pride, blazing like a burning bush.

I have no answer to the blank inequity
of a four-year-old dying of cancer.
I saw her on TV and wept
with my mouth full of meatloaf.

I constantly flash on disasters now;
red lights shout Warning. Danger.
everywhere I look.
I buckle him in, but what if a car
with a grille like a sharkbite
roared up out of the road?
I feed him square meals,
but what if the fist of his heart
should simply fall open?
I carried him safely
as long as I could,
but now he’s a runaway
on the dangerous highway.
Warning. Danger.
I’ve started to pray.

But the dangerous highway
curves through blue evenings
when I hold his yielding hand
and snip his minuscule nails
with my vicious-looking scissors.
I carry him around
like an egg in a spoon,
and I remember a porcelain fawn,
a best friend’s trust,
my broken faith in myself.
It’s not my grace that keeps me erect
as the sidewalk clatters downhill
under my rollerskate wheels.

Sometimes I lie awake
troubled by this thought:
It’s not so simple to give a child birth;
you also have to give it death,
the jealous fairy’s christening gift.

I’ve always pictured my own death
as a closed door,
a black room,
a breathless leap from the mountaintop
with time to throw out my arms, lift my head,
and see, in the instant my heart stops,
a whole galaxy of blue.
I imagined I’d forget,
in the cessation of feeling,
while the guilt of my lifetime floated away
like a nylon nightgown,
and that I’d fall into clean, fresh forgiveness.

Ah, but the death I’ve given away
is more mine than the one I’ve kept:
from my hands the poisoned apple,
from my bow the mistletoe dart.

Then I think of Mama,
her bountiful breasts.
When I was a child, I really swear,
Mama’s kisses could heal.
I remember her promise,
and whisper it over my sweet son’s sleep:

When you float to the bottom, child,
like a mote down a sunbeam,
you’ll see me from a trillion miles away:
my eyes looking up to you,
my arms outstretched for you like night.