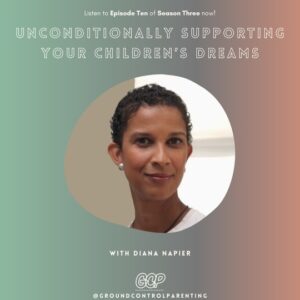 Diana Napier’s daughter Emerson Davis was 3 years old when she told her mother she wanted to play the cello, 5 when she was admitted to a highly competitive music school, 6 when she decided to join the school’s drama club, and 10 when she joined the cast of  “Once Upon an Island” which won a Tony for Best Musical.  Diana, a corporate executive turned writer, found herself in unfamiliar parenting territory as she put her writing career on pause in order to figure out how to best help young Emerson pursue her growing passions in music and theater. Diana’s fascinating journey is a case study of how parenting stretches you in directions you’d never imagined, and reminds us how we have to support our children’s growth and development unconditionally.  Not agreeing to everything, but being ready for anything.

The lessons Diana learned as she helped Emerson pursue her passion for music and theater will be valuable to parents who want to help their children explore their talents and passions, whether these are serious pursuits or just to have fun. You won’t want to miss when Emerson joins us at the end of the episode and talks about the importance of her parents’ support. I asked Emerson, who is now 13,  about how she deals with the inevitable rejection that comes with auditioning, and here is her impressive response:

Well, someone told me that the no’s that you get in life,  you can take that and you can make it help you get to a yes. And that yes will be like 10 times better than anything. And so I just kind of look at that and look on the bright side. And for what I do personally, I think sometimes you will be let down a lot. But I have my parents there to help me and I just kind of aim higher the next time.

Also in this episode, Diana and I talk about postpartum depression, a topic not discussed often enough among parents.   Diana shares her struggle with this illness in Emerson’s infancy, and how with help she was able to move through and beyond it.

And, for the first time, a mother/daughter team plays the #GCP Bonus Round!

Please listen to this week’s episode, Unconditionally Supporting Your Children’s Dreams with Diana Napier here on the #GCP Podcast page,  or on your favorite podcast streaming platform.  And please don’t forget to rate, review and subscribe, and share with your friends!