Today’s Thoughtful Thursday is dedicated to Amiri Baraka, the celebrated poet, writer, teacher and political activist who helped forge the Black Arts Movement of the 1960s and 1970s. Baraka died on Jan. 9, 2014 at the age of 79.

Baraka was born Everett LeRoi Jones in 1934 in Newark, New Jersey. In 1968 he became a Muslim, changing his name to Imamu Amiri Baraka, which he later shortened to Amiri Baraka. He attended Rutgers University and Howard University (where in 1954 he earned his B.A. in English). He spent three years in the U.S. Air Force, and returned to New York City to attend Columbia University and the New School for Social Research. He published his first volume of poetry, Preface to a Twenty-Volume Suicide Note, in 1961.

He was well known for his strident social criticism. Throughout most of his career his method in poetry, drama, fiction, and essays was calculated to shock and awaken audiences to the political concerns of Black Americans. For decades, Baraka was one of the most prominent voices in the world of American literature.

Here are a few examples of Baraka’s poetry. You can read more extensive biographies of him here and here. Enjoy! 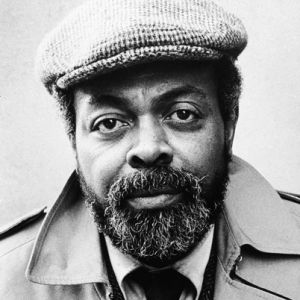 A closed window looks down
on a dirty courtyard, and Black people
call across or scream across or walk across
defying physics in the stream of their will.

Our world is full of sound
Our world is more lovely than anyone’s
tho we suffer, and kill each other
and sometimes fail to walk the air.

We are beautiful people
With African imaginations
full of masks and dances and swelling chants
with African eyes, and noses, and arms
tho we sprawl in gray chains in a place
full of winters, when what we want is sun.

We have been captured,
and we labor to make our getaway, into
the ancient image; into a new

Correspondence with ourselves
and our Black family. We need magic
now we need the spells, to raise up
return, destroy, and create. What will be

WHYS (Nobody Knows
The Trouble I Seen)
Traditional

If you ever find
yourself, some where
lost and surrounded
by enemies
who won’t let you
speak in your own language
who destroy your statues
& instruments, who ban
your omm bomm ba boom
then you are in trouble
deep trouble
they ban your
own boom ba boom
you in deep deep
trouble

probably take you several hundred years
to get
out!

Lately, I’ve become accustomed to the way
The ground opens up and envelopes me
Each time I go out to walk the dog.
Or the broad edged silly music the wind
Makes when I run for a bus…

Things have come to that.

And then last night I tiptoed up
To my daughter’s room and heard her
Talking to someone, and when I opened
The door, there was no one there…
Only she on her knees, peeking into

Her own clasped hands